INSTITUTE FOR FINANCIAL MANAGEMENT AND RESEARCH ( PGDM Course) About the Institute

The Institute for Financial Management & Research (IFMR) , established in 1970 is one of the leading business schools in India which stands out from the others because of its innovative curriculum that emphasises on theory as well as real life exposure as a learning mechanism. As of the present, it offers a full-time as well as a part-time PGDM programme, a well reputed Ph.D programme as well as several short-term customised management development programmes.

How to Apply: Admission Procedure

After the Candidate has applied to the Institute , the candidates are shortlisted. A selection procedure in conducted in various cities based on the applications.

Candidate has to have graduated in any discipline to be eligible to secure admission in the Institute. This includes those candidates who are pursuing their final year degree.          If one wants to apply for the academic year starting 2015, candidate should have the scores for one of the following exams – CAT 2014/ XAT 2015/ GMAT & GRE ( taken anytime between 2010-2015) and CMAT (Sept 2014) . Only Indian Nationals and NRIs are eligible for admission.

IFMR now functions in its new 40 acre campus with state-of-the-art facilities located at Sri City, around 55 kilometres from Chennai. The entire campus is Wi-Fi enabled and the class rooms are air-conditioned and technologically up-to-date. The campus has a vast and well stocked library that is air conditioned and spread over 4000 sq ft. The campus also contains several study halls, a trading floor, cafeterias, gymnasiums and other recreational facilities.

Hostel facilities are available to all students on campus. There are separate hostel blocks for women and men and the rooms are extremely spacious with all the necessary facilities, including a well-equipped gym.

IFMR is well-known for its flawless record with respect to placements. This includes both Summer Internships and Final Placements. Some of the big recruiters are Frost & Sullivan, JP Morgan, Vedanta, etc.

50% of the tuition fee for the PGDM course is covered by a scholarship on a yearly basis. This scholarship is granted to 10% of the students based on their academic performance.
The best outgoing student of this particular course receives a scholarship of Rs. 100000. This is called the Hindustan Unilever Scholarship. A number of medals are also awarded to those who perform outstandingly to motivate and encourage them.

IFMR encourages a wide palette of activities by way of various clubs and committees formed by the student body. The placement committee, the Sports Club, The Cultural Club, Finance Club, Entrepreneurship club, Literary Club and Marketing Club and Samarthan (voluntary service to society) are the most active clubs in IFMR and are extremely efficient in what they do. Van Mahotsav and Wishing Tree are the two main events organised by the clubs and the Institute.

The last day for applications is usually in the last week of January. Shortlisted students list will be released by February-March and the Selection procedure is conducted by April.

END_OF_DOCUMENT_TOKEN_TO_BE_REPLACED

About Institute For Financial Management And Research (IFMR) Chennai 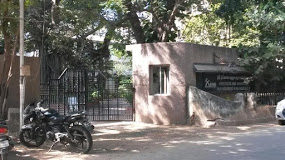 The minimum qualification to apply for admission to the MBA Program is a Bachelor's Degree (10+2+3 years of education) in any discipline which is recognized by the Association of Indian Universities, or any degree equivalent to the Bachelor's Degree, with a minimum of 50% aggregate marks in the Secondary / Higher Secondary / Pre-degree Examinations (or equivalent) conducted by a Board / University.

Those appearing for the final year of the Bachelor's degree examinations may also apply subject to completing their examinations or viva-voce, if any, before June 30. Such candidates will however have to fulfil the above eligibility requirements in respect of minimum academic qualifications for admission and furnish evidence to that effect latest by October 31. At the time of interview and/or admissions, they will be required to produce a letter from their College Principal / Head of Institution stating the exam dates.

The selection criteria for calling candidates for admissions is based on multiple factors as follows:

A combination of all the above factors are used to determine the eligibility of candidates to be offered final admission. Test scores are NOT the only criteria for selection.

A high test score does not guarantee a call for Group Discussion/Interview. The selection criteria are based on multiple factors as mentioned above.